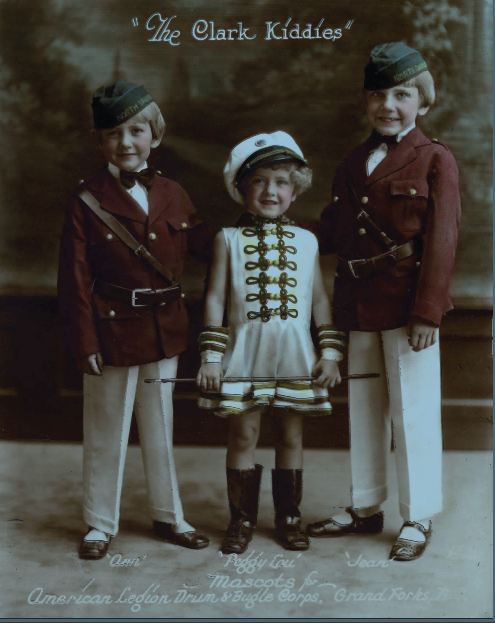 The Clark Kiddies (Ann, Peggy and Jean) performing with the American Legion Drum and Bugle Corps in Grand Forks, ND.

The Clark Sisters were born during the Great Depression. Music was a family tradition. Their grandfather, David William Clark (D.W.) started the Valley City (ND) civic orchestra and performed in pioneer minstral shows. DW and his wife had three sons and two daughters. Sons Louie and Howard were members of the Three Musketeers, a dance orchestra. Marguerite was a composer and piano performer.

William Jennings Bryan Clark, father of the Clark Sisters was also a performer. Jean, Ann and Peggy performed publicly as the Clark Kiddies at the Dakota Hotel with Peggy singing lead. Later they had a 15 minute radio show and recorded radio commercials for local businesses such as Herberger’s Department Store.

With Mary still in high school, the three oldest boarded a train to start a new adventure in New York. They were regular performers on the Major Bowes Amateur Hour and toured with the USO. When Jean needed a rest, Mary joined the group in New York.